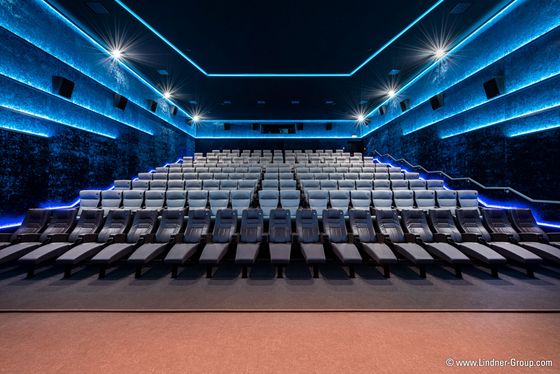 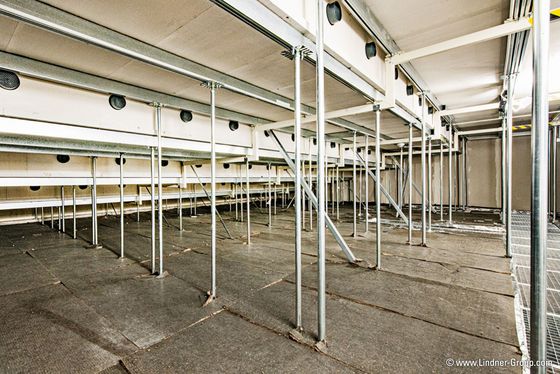 In the period between 2018 and 2019 the Lindner AG | Boden was able to equip four cinemas in Germany with Lindner Hollow Floor Systems. A total of 4,100 m² of FLOOR and more® arena was installed in the ASTOR FILM LOUNGES in Munich, Frankfurt, Braunschweig and Hamburg. All four cinemas were planned by the architects MASKE + SUHREN from Berlin.

The movie lounges are all considered premium cinemas, for example equipped with the latest LED technology and Dolby Atmos sound. Guests are served as far as the comfortable cinema seats and couches directly in the cinema halls. The lightweight steel substructures of the Lindner floor systems with supports up to three meters high and the FLOOR and more® floor panels were made in various designs, depending on the requirements: from in-stage stage layouts to wave-shaped constructions as well as straight or slanted raw floors. Everything was included, even asymmetric or round room geometries. Numerous special constructions were realised.

The “Studio Saal” of Munich´s ASTOR FILM LOUNGE AT ARRI has a stage in front of the screen, a special construction of the Lindner floor system. Under another custom steel construction in the back of the hall, catering and sanitary facilities for the employees are located. Via a staircase made of FLOOR and more® arena, this area can be reached directly from the cinema. The cashier, bar and sanitary areas are also equipped with Lindner floor systems.

The new construction of the ASTOR FILM LOUNGE MyZeil in Frankfurt is part of a shopping centre and also equipped with Lindner floor systems. The expansion of the ASTOR FILMTHEATER in Braunschweig, in contrast, was a 1:1 renewal of the existing cinema. With a total of 2,080 m² FLOOR and more® arena in eight cinemas, it was the largest of the four projects. Floor systems were furthermore implemented in both, the new and refurbished parts of the ASTOR FILM LOUNGE HafenCity in Hamburg. The uncommon wave-shaped raw floor construction required floor supports up to two meters high and with a slope.

The construction of the FLOOR and more® arena floor system in Braunschweig can be watched on YouTube.