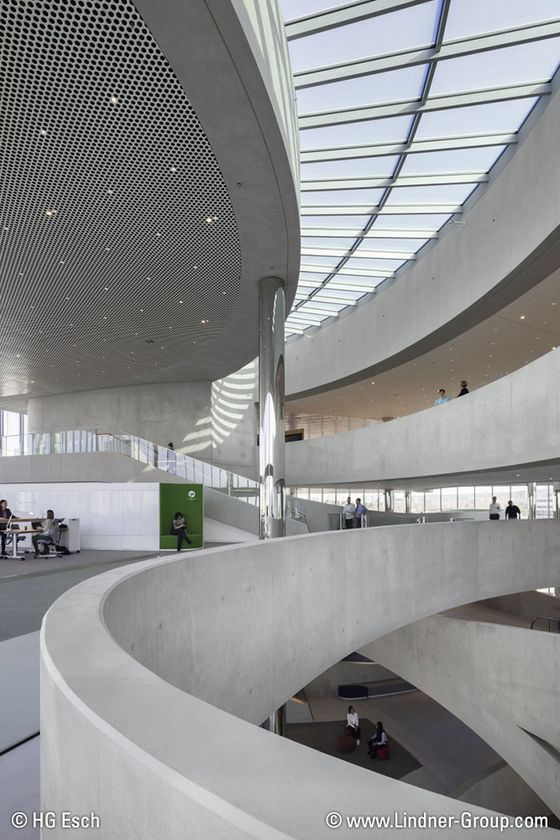 The new headquarters of Merck KGaA receives the German Lighting Design Award in the category "Public Areas/Interior" for the extraordinary lighting concept. Lindner was able to contribute to the special interplay between daylight and artificial light in the building with a semi-transparent glass façade and arched light roofs.

The German Lighting Design Award was initiated to draw attention to the increasing importance of lighting design in architecture. It is awarded annually by Hüthig GmbH. The jury is particularly interested in raising attention for well-designed lighting concepts and thus also to emphasise the profession "lighting planner". In 2019, the award will be given to the "Merck Innovation Center", whose glass façade including the light roofs was realised by Lindner. The lighting concept originates from Lumen³ Lichtplanung GbR. Among other things, the jury considers how light - as a combination of daylight and artificial light - and the architectural environment interact with each other. The influence of light on users' activities and needs also plays a major role.

The extremely delicate post and beam façade system, in combination with semi-transparent glass elements, allows plenty of daylight into the interior of the Innovation Center without giving too much insight. The inner part of the double façade contains a textile sun protection that controls the incidence of light and thus adapts it to the needs of the users. The arched light roofs of the building provide additional brightness and natural light from above. From a bird's eye view, the roof completes the successful aesthetics of the Merck Innovation Center.