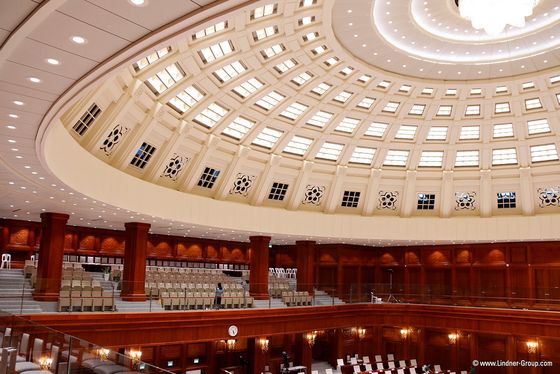 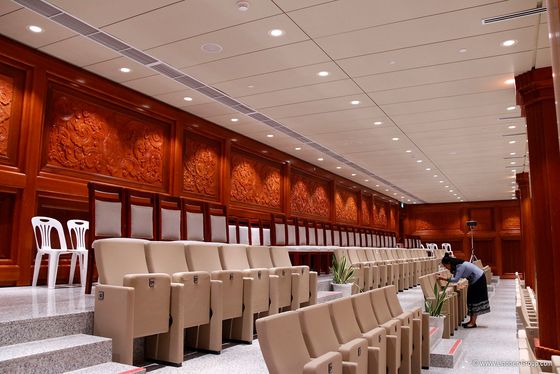 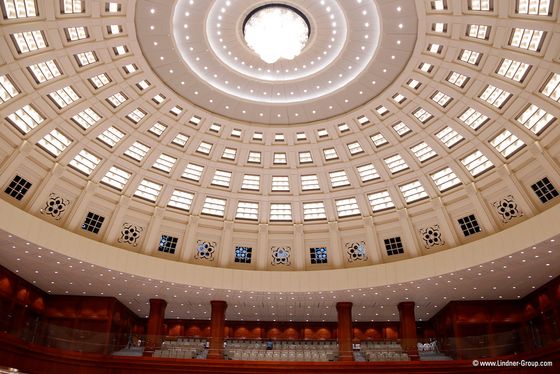 The Lindner Group was involved in the project delivery for the parliament building in Laos: The highlight of the project is the oversized domed ceiling with LED lights and artistic ornaments.

The emergence of the new government building in Vientiane, the capital of the Southeast Asian Republic of Laos, is the result of a very special friendship: The new parliament building was a gift from the government of the neighbouring country Vietnam to the people of Laos. With a solemn ceremony, the building was handed over in 2021. Today, the parliament is not only considered a sign of the bond between the two countries, but also a landmark of Laos. With its traditional yet magnificent construction, it impresses both from the outside and the inside.

The Beginnings of an Extraordinary Project
The Lindner Group has also been part of the story from the very beginning: a few years ago, Lindner was commissioned to carry out a special domed ceiling with LED luminaires as a product supply deal during the construction of the parliament building in Vietnam. The end customer, the Ministry of Construction (MOC), was extremely satisfied with the result. As a result, years later the MOC asked Lindner again via its Vietnamese partner NQC Co. Ltd. to present a solution for the ceiling of the parliament building in Laos. After clarifying the technical requirements, a joint concept was finally developed and the order for the projected product supplies was placed.

Hall full of Splendour and Tradition
The services carried out are located in the main plenary hall of the building. With room for around 150 delegates, the Laotian National Assembly is held there twice a year. The FLOOR and more® arena hollow floor system, designed and supplied by Lindner, is installed on the floor of the hall. The dry hollow floor was specially developed for grandstands ‒ for example in cinemas, lecture theatres or plenary halls ‒ and impresses with its particularly high load-bearing capacity, low weight and quick installation.

A Ceiling in a Class of its Own
The highlight of the hall becomes apparent when you look up: The impressive domed ceiling was also designed and produced by Lindner in Germany. The dome with the adjoining flat ceiling was divided into different sections and designed as a metal ceiling. During the planning phase, it had to be taken into account that the dome ceiling had to be installed from the maintenance area behind the visible dome. Only a small landing area was available in the plenary hall to transport the segments up to the ceiling ‒ which made the assembly even more difficult. With a lot of patience and experienced fitters, however, the installation of the ceiling elements succeeded without any problems.

Unique Works of Art
The artistic ornaments made of LinCrete, which adorn the entire domed ceiling, are another special eye-catcher. The ornaments are replications of a pattern that a local artist first carved in wood. Finally, exact impressions were taken from these, from which individual LinCrete elements were created. LED luminaires complement the magnificent ceiling and bathe the room in a pleasant light. It was important to ensure that the luminaires emitted sufficient light but were not reflected as light spots in the delegates' tablets.
All the systems supplied were planned and manufactured in detail by Lindner in Germany in order to reduce the installation work on site to a minimum. All in all, an impressive example of the possibilities of project-based product supplies.
You can find out more about the parliament building in Laos here.