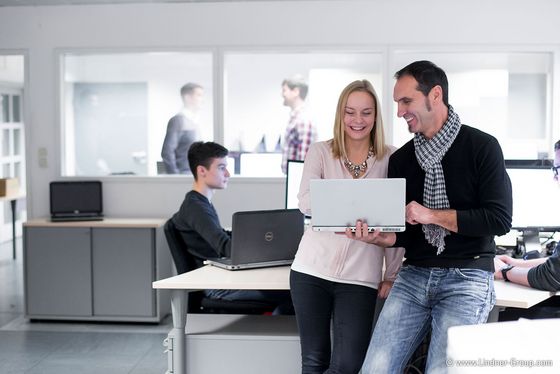 A successful career starts best with a good apprenticeship! Following the Lindner principle of "(leadership) forces from within our own ranks", the promotion of young talents plays a particularly important role. This also applies to the subsidiaries such as Lindner France SASU. Here, an individual dual training system was introduced.

With around 80 new apprentices per year, the Lindner Group is the largest training company at its headquarters in the Lower Bavarian district of Rottal-Inn. But training also takes place at the branch of the French subsidiary, near Paris. Of the approximately 50 employees, there are five apprentices who are now working in project management after one or two years of "apprenticeship", respectively. Lindner relies on a highly practical training in the company. The dual training system is not as commonplace in France as it is in Germany, but thanks to the cooperation with the right schools as well as the commitment of trainers and trainees, five young colleagues have now been successfully taken on in the permanent position.

The branch Lindner France SASU is located north of Paris in Chambly. The company manages the customers and projects of the French market and provides the full Lindner product expertise and high capacity for the execution of interior fit-out projects. In over 25 years, Lindner France has been able to gain a wealth of experience in the various areas of interior fit-out and, in addition, can resort to the far-reaching possibilities of the Lindner Group, especially for special projects.