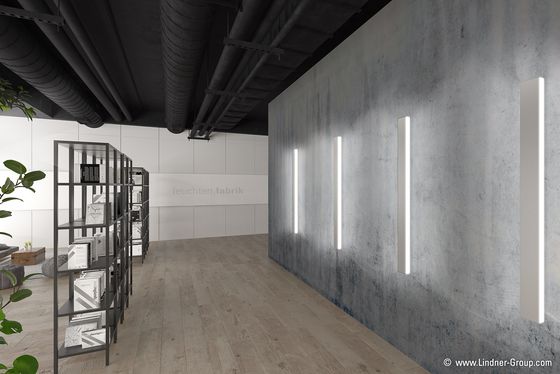 Lindner SE | Leuchtenfabrik recently presented a new surface-mounted luminaire with energy-efficient LED technology. The luminaire of type WLL 47, which radiates on both sides, provides a real eye-catcher in the lighting concept of your building.

Thanks to the use of LED modules (LED 840, optionally with LED 830), the luminaire system enables energy-efficient and energy-saving lighting in your project. Among other things, this reduces power consumption and thus makes a further contribution to sustainability. The 62 mm high and 90 mm wide wall luminaire is equipped as standard with a switchable ballast for current limitation and lamp ignition. A DALI dimmable version of the luminaire is also available on request. But in addition to the "inner" values, the exterior of the lamp can also be configured. This is because the high-quality housing made of sheet steel is powder-coated in the Lindner production facility: Here, a choice can be made between more than 2,500 colors from the RAL color chart. As a result, the luminaire housing can be individually adapted to the customer's wishes as well as the project.

In order to also create the right lighting atmosphere inside the building, a choice can be made between three different types and wattages (15 W, 20 W, 25 W) of the luminaire. As a result, luminous fluxes of 1,100 lm to 1,870 lm can be achieved. The light is distributed and directed by means of an opal clip-in acrylic glass cover on both sides. The two homogeneously illuminated, opal acrylic glass covers thus ensure the best possible lighting quality in the building.

Simple Mounting of the Luminaire

The surface-mounted luminaire, which is already supplied with accessories such as end caps and mounting brackets, is installed by simply hooking it into a wall rail: this connection to the luminaire fitting is then also used to make the electrical connection with the aid of internal plug-in contacts. The luminaire is thus ready for use in just a few steps and, thanks to protection class I, is protected against electrical shocks in accordance with protection class IP 20.

More information about the wall lamp as well as the product data sheet and more is available HERE.