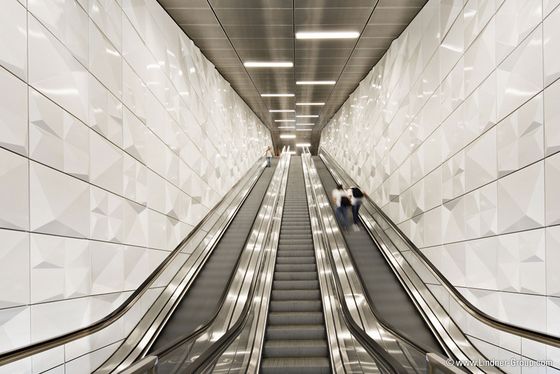 Every three years, the architectural prize "Nike" of the Bund Deutscher Architekten (BDA; Association of German Architects) is awarded in six different categories. Three of the six awards went to projects involving Lindner this year.

The six categories in which a Nike is awarded should reflect the essential criteria of good architecture. Therefore, a Nike is awarded for atmosphere, for symbolism, for unity, for composition, for social commitment and finally for innovation. In 2019, the Elbphilharmonie in Hamburg has been awarded the Nike for symbolism, which is granted for "symbolism and metaphorical expression beyond the function of the building". Lindner was able to contribute a sophisticated fit-out package including numerous special constructions for the foyers of the halls as well as numerous lounges, office, backstage and sanitary areas to the construction of the Elbphilharmonie.

This year, the Wehrhahn underground line receives the Nike for atmosphere, because "it conveys a special atmospheric impression through shape and appearance, light and space as well as through material and colour. The 3.4 km Wehrhahn line has replaced the tracks in Düsseldorf city center with its six stations since 2016. At each of the six stations, Lindner ceiling systems were used for special requirements and with an exclusive design.

The Bremer Landesbank is awarded the Nike for unity, because "material, form and construction interact particularly effectively". The predecessor building, located in a prominent position directly on the Domshof, was demolished and the new headquarters of Bremer Landesbank were built. The aluminum façades and aluminum windows of Lindner harmoniously interact with the sheet metal and ceramic façades and plastered façade as well as with the windows in the inner courtyard of the Landesbank Bremen, which were also made by Lindner.