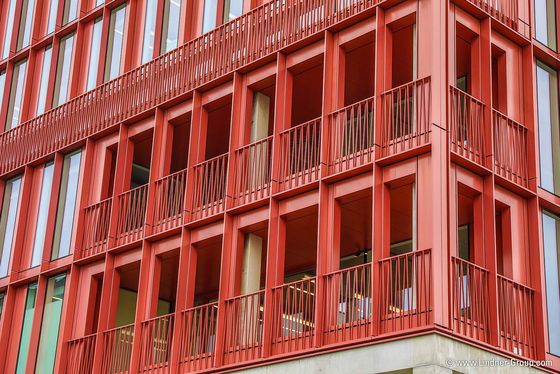 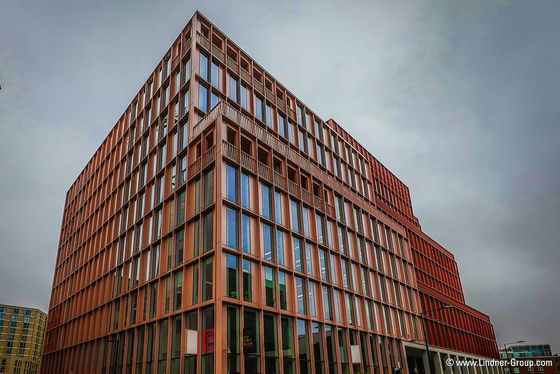 As part of an urban development project named R7, a colorful office building with 14,400 m² was built in London’s district King’s Cross. On the ground floor, next to a cinema, there are also spacious business and catering areas. Lindner designed, produced and installed the building´s facade system.

There is a lot of change going on in King´s Cross. As a part of this large-scale urban development project, a new destinctive eleven-floor building was constructed. This pink-colored building has 14,400 square metres of net floor space for numerous shops and catering establishments, a cinema, offices and a communal roof terrace with impressive views of the entire district. The upper floors can be flexibly adapted to the respective office requirements.

When viewed form the outside, the building appears to be rising; a visual effect created by a large number of vertical baffles on the facade. Also, the colour scheme is quite destinctive: two different shades of pink. Because of the differentiated appearance of the building in comparison to its surroundings, R7 was awarded with the BREEAM Outstanding certification.

Thanks to the low-emission energy supply of the building and the ability to control the amount of the gained solar energy, it can be seen as a beacon project for the comprehensive sustainability concept in King's Cross.

How was Lindner involved here? Lindner Facades Ltd produced and installed the facade system. Baffles and railings frame the numerous terraces and gardens of the building skilfully. Efficient project management made it possible to accomplish work successfully within the time and cost frame.