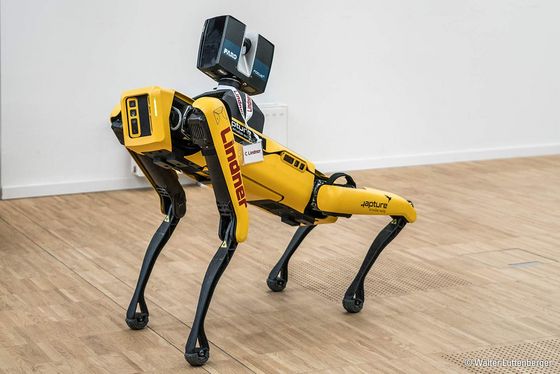 The Lindner Group has a new, four-legged helper for complex construction projects. The SPOT scanning robot looks like a metal dog and enables complete digital construction site documentation and exact measurement with the help of 3D scans. Its first assignment for Lindner was in the Austrian Parliament in Vienna.

The Austrian subsidiary of the Lindner Group, Lindner GmbH, was commissioned with extensive interior design services for the renovation of the parliament building in Vienna. In cooperation with qapture GmbH, exact three-dimensional images of the premises were first taken with the help of the robot dog. This saved time and produced very accurate results: SPOT delivers scan data and pictures accurate to the millimetre, even in large and cantilevered buildings such as the Austrian parliament.

The innovative technology comes from Boston Dynamics: The goal in developing robots like SPOT is to optimise work processes, increase productivity and ultimately also relieve people on the construction site. The digital helper is also often used in areas that are difficult to access or dangerous. In this way, work accidents are prevented and the performance or quality of the measurements is improved.

The robot dog first walks independently through the building and scans the respective rooms. The 3D scanner on its back then creates an evaluable point cloud. This is then converted into a model - also called a "digital twin". Additionally, the data can also be output as an image in a 360° view. Subsequent optimisations can further improve the quality of these images. Potential sources of error or necessary redesign measures can thus be reliably identified in good time.

You can find more information about the Parliament Building in Vienna here.