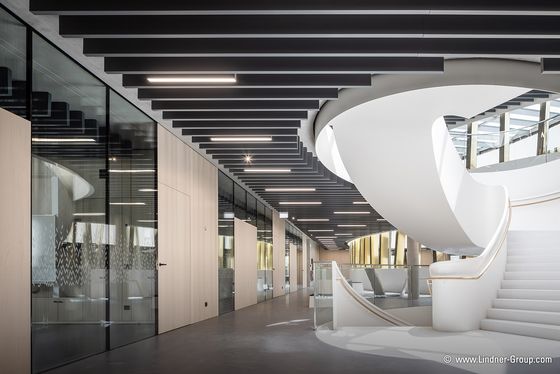 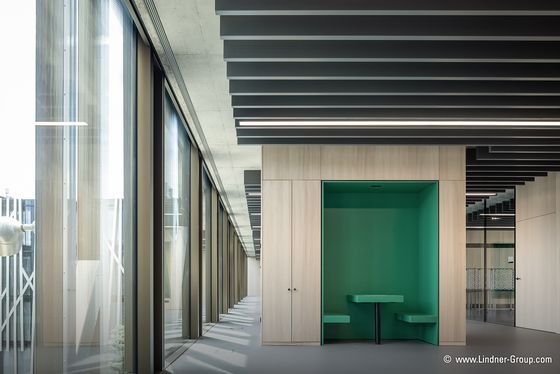 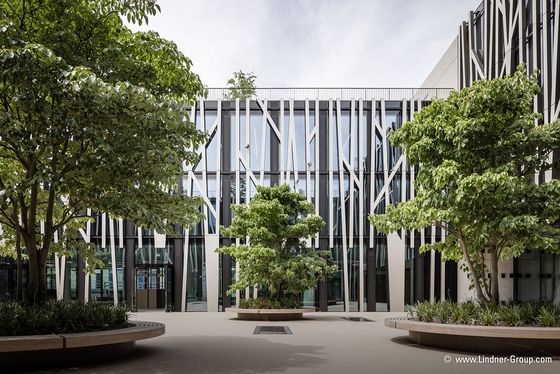 Just in time for the start of school in Bavaria, the doors open again today for around 1,200 pupils and over 150 teachers of the "most modern school in Bavaria" at Keßlerplatz in Nuremberg today. The former school building from the 1960s was getting on in years, which is why a new building for the Maria Ward Schools was unavoidable. Lindner was also involved in the project with its wall and object design divisions.

A School for the next Generation

The Maria-Ward Schools are an amalgamation of a primary school, a secondary school and a grammar school: On an area of around 23,500 m2, the schools now offer enough space for 60 classrooms with modern equipment, an underground triple sports hall, two refectory areas and a large play and creative room. An eye-catcher of the girls' school is the elliptical atrium: The heart of the building is not only used as an assembly hall, but also as a multifunctional event venue. Extensive glass surfaces here allow a view of the inner courtyard, while the glass roof lets the interior of the building and its gold-coloured elements shine in daylight.

When designing the schools, the clients of the Archdiocese of Bamberg and architects from H2M paid attention to high-quality materials with a feel-good character: For this reason, brass, glass, fair-faced concrete and silver fir elements were mainly used. A lighting concept coordinated with the colour concept and optimal room acoustics round off the modern appearance of the schools. The different materials are reflected both in the wall elements and in the built-in furniture used, which was manufactured by Lindner Objektdesign in its own factory. In addition to more than 250 built-in cupboards, designed in a wide range of sizes, other special fixtures such as the elliptical brass counter and the curved lawns with artificial turf were also made by Lindner. The interior fit-out is complemented by illuminated storey counters, play and learning furniture as well as ultra-modern teacher's kitchens and custom-built teaching desks.

Clear lines are reflected in the modern design concept of the schools: That's why Lindner, together with Vetrotech, developed a glass partition system that could be installed without frames thanks to grooves in the floor and ceiling. But this was not the only special architectural feature in the Catholic girls' school: The used wooden door leaves were integrated into the glass walls without frames and flush with the surface on both sides. For this purpose, real wood veneered surfaces made of silver fir were chosen, which were partially covered with lacquered brass sheeting in the stairwells. This means that the doors there are integrated almost invisibly into the brass wall cladding. The large surfaces thus created emphasise the modern character of the school building. In order to also meet the fire protection requirements of public buildings, the installed doors and glass wall systems were designed in T0, T30 and T90 or F0, F30 and F90 as required.