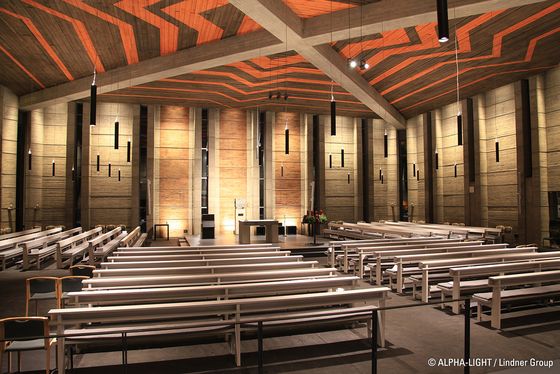 The parish church "Zum Auferstandenen Herrn" in Leitershofen, Germany was extensively renovated from February to October 2020. Luminaires from Lindner Leuchtenfabrik now complement the interior. Not only the reopening, but also the anniversary could be celebrated with a festive service – the consecration day was celebrated for the 50th time.

When the old church became too small in the 1960s, a parish centre including a parish church with sacristy and community centre, parsonage and nursery was built in the centre of Leitershofen according to plans by the architect Adolf Zach. The consecration took place on May 3, 1970. The church interior made from exposed concrete was deliberately kept simple and exudes calmness.

New Design for the Parish Church

The interior of the parish church was renovated in an extensive and complex process according to plans by architect Ulrich Rumstadt and redesigned in the process: The aim was to emphasize the special qualities of the church interior once more and to create a new experience at the same time. The most noticeable change can be seen in the altar island, which is lower and slightly larger than before. The three-sided circumferential steps illustrate the stronger connection between the priest at the altar and the community. Through the 28 mostly floor-to-ceiling windows a lot of daylight floats into the church. They are complemented by a new lighting concept from Oswin Nikolaus Lichtgestaltung.

Lindner Luminaires Lighting up the Room

LED luminaires mounted concealed into the ceiling provide indirect lighting on the walls and trace the daylight. Numerous pendant luminaires – custom-made by Lindner Leuchtenfabrik – ensure a significantly different perception of space. They shine much brighter – both downwards and upwards – and thus enlighten the ceiling as well. Depending on the type of service, different light moods and scenarios can be created.

The pendant lights consist of an aluminium pendant tube in a slim design with a diameter of 80 mm and a tube length of 580 mm. The powder coating in RAL 9005 matt black and the finely structured surface ensure a subtle appearance. Highly efficient LED modules in warm white enable indirect and direct lighting. They are separately dimmable for different light areas. The areas can be programmed according to the days and forms of worship. The luminaires are suspended from a central Y-steel rope in the special colour black with a rope length of 6 meters.

With the new lighting concept, the church interior shines in the right way for every requirement and creates the right atmosphere for every ceremony.