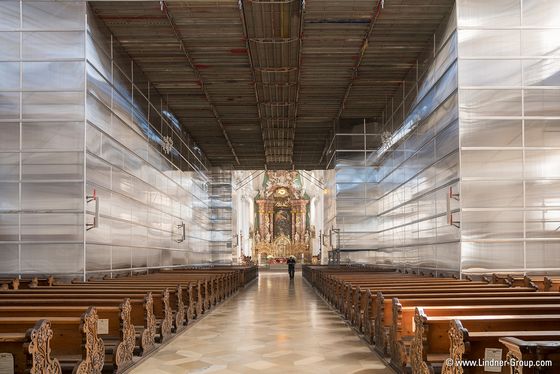 For the renovation of the Basilica of St. Martin in Weingarten, Germany, Lindner Gerüstbau GmbH realised an impressive scaffolding project: the support structure inside the church was planned in detail and carefully executed – therefore, it now enables the renovation of the nave, roof truss and interior walls which will take around 6 years.

With a dome height of 67 metres and a length of 102 metres, the basilica is considered the largest baroque church building in Germany and north the Alps – it is almost half the size of St. Peter's Basilica in Rome. Therefore, the church, which was consecrated in 1724, is also known as the "Swabian St. Peter". It impresses with its extraordinary ceiling frescoes, high-class choir stalls, splendid altar sculptures and an impressive organ.

During the last interior renovation in 1954, the historic plaster was removed and replaced over a large area – which is why cracks and plaster peeling in dry areas have remained within limits. Nevertheless, after almost 70 years, renewed renovations are necessary: Moisture and wood pest infestation in the roof space led to serious damage. Mould and mould stains can be found in the baroque paintings. Technology is not up to date either: therefore, not only cleaning, repair and conservation work is due, but also technical modernisation – especially concerning fire protection.

The intensive renovation affects the nave, the roof truss as well as the interior and exterior walls. The measures are divided into four phases so that the basilica can be used for church services during the construction work. The elaborate scaffolding construction by Lindner Scaffolding is now in place and enables the further construction steps: It was planned using CAD and then skilfully built up in teamwork. A well-founded safety system prevents accidents and health hazards for the workers on site.