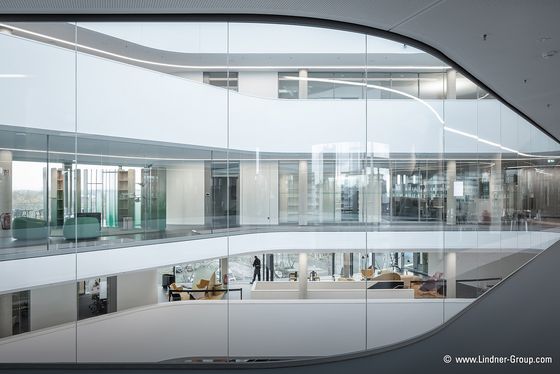 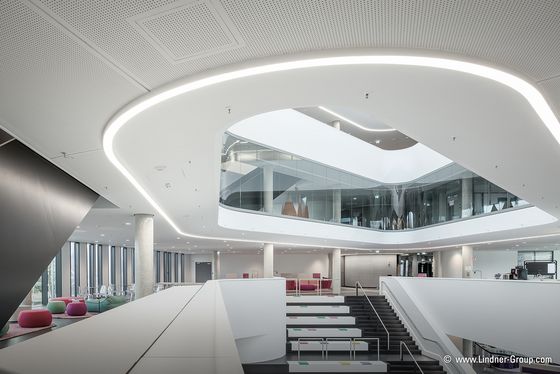 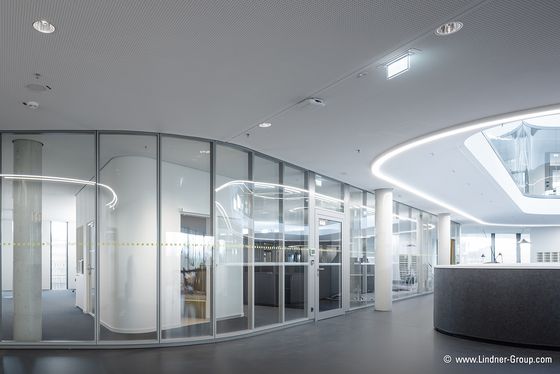 Based on plans by HENN Architekten, Lindner SE has created a modern, open-plan headquarters for the materials manufacturer Covestro AG in Leverkusen. The aim is to support employees in working efficiently and cooperatively on polymer materials.

At the end of 2020, Covestro AG already moved into its new work campus in the "chemical capital" of Leverkusen. However, due to Corona, the move into the new building was made with a significantly reduced team. Since then, the administration building with six floors and modern office space has offered enough space and optimal working conditions for up to 750 employees. In addition to the topics of sustainability and design, the focus of the new building was also on the implementation of the New Work principle: According to this, an open workplace concept for improved collaboration and communication between the company divisions – but also the customers, partners and the general public – was strived for.

Today, the implementation of this idea is particularly evident in the open office spaces and meeting areas: Here, floor-to-ceiling Lindner Life Freeze 137 glass partition systems create so-called "meeting boxes", which serve as places of retreat. Partly designed as curved glass wall elements, they underline the individual design claim and yet meet the high static requirements. The bright design concept is complemented by informal meeting points, lounges and a large atrium, which functions as a freely accessible meeting area. Recesses in the façade also create two 100 m² terraces for outdoor relaxation. Some Covestro products were also used in the spatial design, such as polycarbonate panels for the interior facades and the coating of the terrazzo floor.

The implementation of the room concept according to the plans of the KINZO company was carried out by Lindner SE, which, as the general contractor for the interior fittings, handled various trades from dry construction to subcontractor services. The system walls, built-in furniture as well as counters, doors, ceiling and floor systems were produced in-house. The Lindner raised access floor NORTEC can now be found in the new Covestro building over an area of more than 12,000 m²: The raised access floor NORTEC offers sufficient installation space for ventilation, heating and technology, combined with a high level of walking comfort. In heavy-duty areas and in the "meeting boxes", the FLOOR and more® power access floor was chosen, which was largely covered with textile flooring. Among other things, 5,400 m² of the Plafotherm® GK HEKDA® heated/chilled ceiling system ensure optimised acoustics and a good indoor climate in the open spaces.

Lindner Leuchtenfabrik (commissioned by the companies Kinzo and Signify) developed and manufactured individual design luminaires for standing workstations and work islands. The design specification was an acoustically activated fabric covering in the form of a bridge luminaire that extends over three double workstations.

Like Covestro, Lindner relies on the guiding principle of the circular economy in the production process of the system products: For this reason, almost all Lindner systems installed in the building have been tested according to the Cradle to Cradle Certified® product standard. In addition to the use of ecologically safe raw materials and the use of renewable energies, this also includes the management of the system products in closed material cycles. The NORTEC raised access floor system used is also the first floor in the world to bear the Cradle to Cradle Certified® gold award.