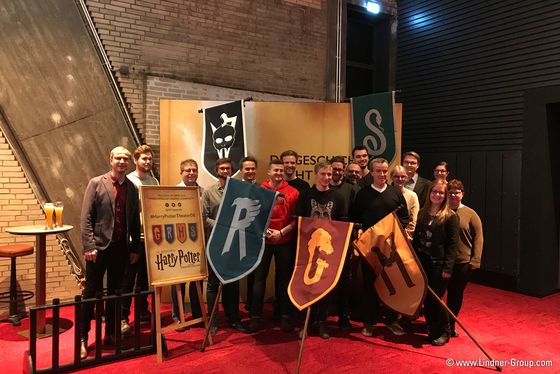 The Mehr! Theater in Hamburg is the German venue for the play "Harry Potter and the Cursed Child". Lindner was part of the rebuilding of the theatre spaces as fit-out general contractor and realised the majority of the fit-out trades in the theatre hall as well as the backstage area, the rehearsal stage and the VIP lounge area.

Technical highlights of the rebuilding are on the one hand the approximately 14 metres high F 90 drywalls with steel construction: Due to statistic reasons, they could not be attached to the already existing concrete ceiling. On the other hand, Lindner implemented a Cocoon-system, which forms a detached F 90 room-in-room construction and therefore reaches a pedestal-free span of 16 metres.

Thanks to numerous process optimisations, the tight schedule was adhered despite some challenges. Lindner was able to develop special solutions ready for execution. Thus, the rehearsals in the theatre hall could start as planned. The client Mehr! Theater made it possible for all employees involved in the fit-out project to participate in a dress rehearsal in February as a thank you for their commitment. Expectedly, the piece celebrates its German premiere at Mehr! Theater in October 2020.