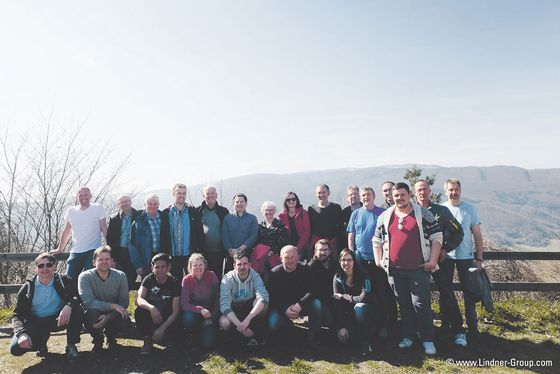 One team plays a special role in Lindner Group’s more than 50 years of company history – the Team 6 of the division Fit-out South-Southwest. For 40 years, the independent team has been very successfully processing various projects all over the South of Germany.

On 1 April 1979, the sixth cost centre was established at Lindner. Also, the name of this new department was derived from this cost centre: Team 6. “The aim of the department is the efficient processing of orders with a turnover of about 1.5 million German mark per year with an installation order of a maximum of 20,000 German mark”, declared Department Manager Max Weber in 1979, when the division was founded. Team 6 started with three installation groups, which have already reached the sales target in the second year after foundation. In the 10th year of existence (1989), 400 construction sites with a turnover of approximately 8.5 million German mark were completed. Today, another 30 years later, Team 6 realizes an annual turnover of just under € 10 million with approximately 100 projects in the South of Germany – with an above-average result. Perhaps, the most extraordinary thing about Team 6 is the continuity: the continuity both in the departmental membership, but also in the result and in the organizational structure. Team 6 has maintained its independence for more than 40 years and still has its own tender estimation, project planning, commercial department and installation team, so that here is a functioning, self-sufficient project handling with a stable and positive result. Despite this stability, the department showed flexibility in its 40 years. Team 6 was one of the first departments to drive digitalization and tackle the computer era within the Lindner Group. Team 6 is considered to be THE breeding ground of young talents in drywall construction. Every year, several drywall apprentices are trained and, as far as possible, integrated into the installation team. And several of today's executives have earned their first spurs within Team 6.

For the 40th anniversary, the entire team made a two-day trip to the Wachau (Austria). In a relaxed atmosphere, the strategy for the next 40 years was jointly developed and it was once again proved: “the name is programme!” Here, in fact, it is all about the team. A united and great team which today is successfully led by Albert Binder.