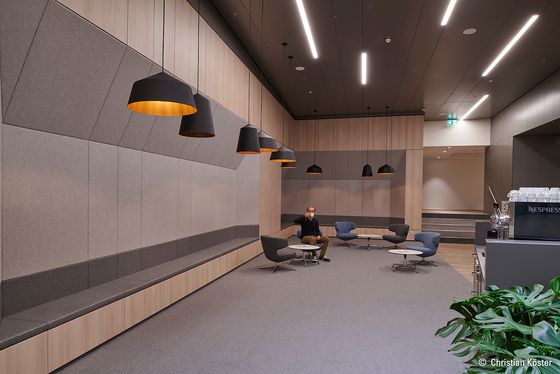 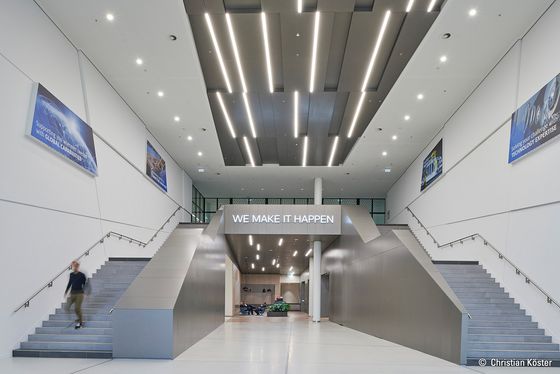 The Henkel AG & Co. KGaA has recently opened a new innovation and customer centre for adhesive technologies: The so-called Inspiration Center Düsseldorf (ICD) is illuminated with special solutions from the Lindner luminaire department.

Space for Creativity and Innovation

Henkel is a leading supplier of consumer and industrial goods: with brands such as Loctite, Technomelt, Pritt and Pattex, the Henkel Adhesive Technologies business sector is the world's largest manufacturer of technologies for adhesives, sealants and functional coatings, with annual sales of almost 10 billion euros. In order to further expand its innovative strength and competitive advantages, Adhesive Technologies has established the Inspiration Center Düsseldorf at its corporate headquarters as a global innovation and customer centre. The modern building with a floor area of around 47,000 square metres has more than 30 laboratories and is designed as a place for inspiration, innovation, collaboration and communication. The ICD provides space for more than 600 employees and also serves as a worldwide centre for visits from customers, partners, suppliers and more.

The heart of the Inspiration Center is the large, light-flooded atrium with its surrounding laboratory areas: These are separated from each other by Lindner Life Stereo 125 partition systems. The office and meeting rooms are also divided by the glass partition wall system – and supplemented by matching aluminium frame and wooden doors. In the area of the large plants in the basement, the partitions were further extended with rotatable lamella glazing as smoke outlets. The installation of COMP+ aluminium honeycomb elements as wall and ceiling claddings completes the extension.

Good lighting contributes significantly to a stimulating working environment: To meet the high requirements, the Lindner luminaire factory developed special solutions for the ceilings on the first and second upper floors, in the foyer and in the lobby. A total of more than 30 different luminaire variants and lengths were installed there, including the custom-made, dimmable LED light channels type LK73 OS with DALI control. The design and installation are adapted to the special ceiling system – for example, the colour of the lighting matches the ceiling design. The luminaires were delivered ready to plug in, with factory-fitted connection cable including a mounting solution for quick and easy installation on site.